The GripTester is a braked wheel, fixed slip device with drag and load (horizontal and vertical force) continuously monitored and their quotient (coefficient of friction) calculated and displayed. The data collection computer can be any standard IBM compatible laptop or it can be a specially designed, ruggedised computer. 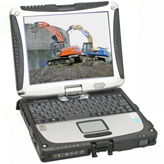 Calibration is from first principles and can be carried out by the operator, on-site, in about ten minutes. The measuring tyres, made of ASTM rubber, are all tested for consistency before delivery. Main Application Areas


The GripTester is used extensively in two main application areas and these are now described.

The GripTester is a highly manoeuvrable instrument for investigating accident sites and other problem areas. It can also carry out substantial surveys as part of a Pavement Management System. The transformation from one role to another is effected simply by changing the towing vehicle. In both roles, the GripTester's low consumption of water is a great advantage. The data collection software provides the operator with facilities for recording markers during surveys. Results can be scanned in the field and the data presentation software can later be used to produce a printed report. The data files may also be imported to any standard spreadsheet.

Excellent correlation with SCRIM has been established at the UK TRL and the GripTester successfully took part in the in 1992 PIARC "International Experiment to Compare and Harmonise Texture and Skid Resistance Measurements". Results can therefore be linked both to the thresholds used by the UK DTp and to the PIARC International Friction Index.
GRIPTESTER for AIRPORTS

The GripTester can be towed by almost any vehicle and a complete runway survey can easily be carried out by a single operator. The average friction reading for each third of the runway is automatically displayed during the survey and results can be inspected while still on the runway.
Data can be printed (on standard size paper) and/or archived to a PC for detailed analysis and comparison. This is particularly useful when monitoring the effects of rubber deposits and the efficiency of rubber removal programmes.

Where winter operational testing is a necessity, a dedicated GripTester is required: this can be operated on runways contaminated by snow, slush or standing water at least up to the levels specified by the FAA in their Advisory Circulars. Where only maintenance testing is required, the GripTester (and its self-watering kit) can easily be transported by light aircraft for shared operation, allowing ICAO recommendations on runway friction testing to be more widely satisfied. This versatile instrument, which is included in the ICAO Airport Services Manual and Annex 14 to the Convention on International Civil Aviation, is already in use at some of the world's busiest airports as well as at some of those with only occasional traffic. For instance, GripTesters can be found in Hong Kong, throughout the Caribbean Islands, extensively throughout the UK and mainland Europe, Estonia, Canada, South Africa, Malaysia, New Zealand, Poland, Norway and ............... In addition the GripTester is used by the US and Canadian Air Forces and the US Navy. Additional benefits to highway and airport maintenance staff can be achieved with the ICELERT weather monitoring system to help keep the runway and taxi-ways free of ice by monitoring surface conditions and performing anti-icing operations BEFORE ice formation. Other Applications The GRIPTESTER can also be used in a wide range of other important application areas such as : Pedestrian Areas

To allow highway authorities to record the surface friction of pedestrian areas, the GripTester can be used in pushing mode with its own self watering tanks. This improves scheduling of maintenance work and can contribute to an authority's defence against litigation arising from pedestrian accidents.
Horizontal Road Markings Slippery horizontal road markings can be a hazard for road users and assessing their friction characteristics can be difficult. British and German authorities have pioneered the use of the GripTester in towing mode for on-site testing of motorway markings; in France it is extensively used in pushing mode for testing homologation sites and urban areas. Helidecks

The GripTester can easily be transported to measure the friction of helidecks on offshore oil platforms. This can eliminate the need for the large, inconvenient rope mesh nets. The GripTester has been used extensively on offshore North Sea oil platforms over the past few years. It has also been used by both the UK and the US naval authorities to measure the surface friction on the flight decks of aircraft carriers and naval helidecks. Research into Surface Characteristics and Materials With its capacity for accurate acquisition of surface friction data under widely differing environmental conditions and at speeds ranging from 5 km/h to 130 km/h, the GripTester is an ideal research instrument for Materials and Transport Safety engineers. Analysis and Presentation Software A comprehensive suite of analysis and presentation software is available to support the GripTester :

GTMonitor for comparing "there and back" runway monitoring surveys GTCalibrate for producing a colour map from a full "side to side" runway calibration survey GTUser for reviewing a road survey and printing a detailed report. Accessories A wide range of accessories are available, including:

For self-watering: a variety of tanks, pumps and control valves
For operation in pushing mode: pushbar and water tanks
For the data collection computer: carrying cases and in-vehicle supports. Technical Specifications and Technical Reports Later this year we will be including additional pages with key technical reports along with details of the main specifications.
For example we can provide :
A comparison report written by the UK TRL (Transport Research Laboratory - "A comparison of SCRIM and GripTester 1993".
"Friction Harmonics" by Delia Harverson and published in World Highways, March 1993
along with other key articles and reports.
If you require these now please ask.